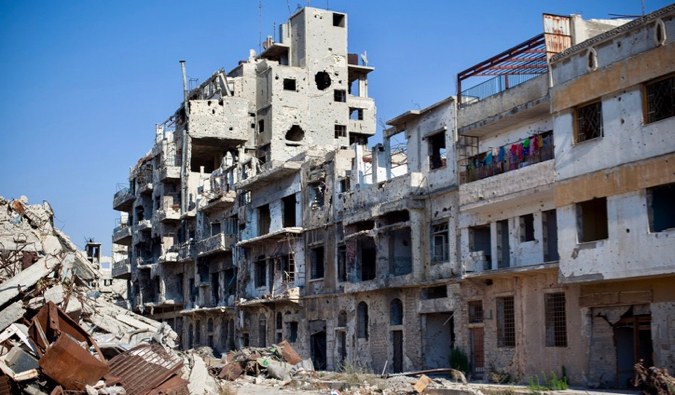 If you’re like me, you associate travel with positive emotions: the feeling of the sun on your shoulders halfway around the world, of breaking bread with people from cultures different than your own, and the inner joy of making your way across unknown lands safely.

Travel improves our lives, broadens our horizons, and helps us understand the world we inhabit.

Yet these are experiences few humans will ever have.

As widespread as it has become in recent years, travel is still a privilege afforded only to a few.

That is especially true of war zones, where residents are more concerned about living through the day than seeing the wonders of the world. Things we take for granted — the ability to turn on a tap and get drinkable water, to flick a switch and get light, to walk to the store and find food on the shelves — are rare or absent for those suffering through such conflicts.

While there many places in the world that are like that, today I want to talk about one in particular: Syria.

Lately, I’ve seen a number of folks visit Syria as tourists. When asked why, they usually talk about trying to highlight the good people in the country and how such places aren’t “just what you see in the media.”

And while both of those things are almost always true, I don’t think one should visit conflict zones as a tourist — whether you’re a writer, blogger, or everyday Joe or Jane. I think it’s reckless and shows a complete lack of empathy and respect for the people suffering through the horrors of war. It’s self-centered. It doesn’t actually help in any real way. It usually creates a distorted picture of the situation. It’s a misuse of Western privilege.

No one doubts there are wonderful people and places in Syria. In fact, one of my greatest travel regrets is not having visited Syria before the conflict, because friends waxed poetic about how the hospitality and openness of the locals were second to none.

And the media is always more “doom and gloom” than the reality on the ground.

But that doesn’t change the fact that there is a continuing war going on in Syria where millions continue to be displaced and dying. While bloggers or tourists are there taking pictures, hundreds of thousands are freezing.

The country has been in a civil war for close to nine years. Over 400,000 civilians have been killed (some estimates put that number as high as 585,000). That’s more than the entire population of places such as Iceland, Belize, the Bahamas, or Malta.

On top of that, over 13 million people have been displaced — with half of those being forced to leave the country entirely. And many can never return due to retaliation from government forces against them or their families.

And almost half of the schools in the country have been affected, with one in three children unable to attend.

And while ISIS has been pushed back, they still have control of some areas, and thanks to Trump, there is also now an influx of both Turkish and Russian troops. (And that’s only causing more chaos.)

As millions suffer through ongoing war, chemical attacks, and displacement, visiting as a tourist and having a fun time is a horrifying idea to me. It makes those who go seem more concerned with their ego than the plight of the country. “Well, I just really want to see the country, so fuck those who are suffering!”

War zones are not tourist attractions. Bombed buildings that used to be filled with life are not backdrops for Instagram shots.

While millions suffer and die just hours away or are displaced and cannot return home, bloggers or tourists shouldn’t be frolicking in the places where they used to live and laugh and spend time with their children, snapping pictures and having fun while giving lip service about how it’s sad to see what is happening to the country. That to me seems like a major disconnect.

If someone wants to go there and report as a journalist to educate the world and try to mobilize action to stop the conflict, that’s one thing.

But I’ve yet to see one person who wasn’t an actual journalist from the mainstream news media do that. Instead, I hear talk about how “complicated” the situation is, how things are being rebuilt, and how everyone is happy and things are safe, whitewashing the war crimes of President Assad. If you follow these accounts, you get the impression the worst is behind the country. (It’s not. And the fighting in Idlib is getting incredibly worse, with children being greatly affected.)

But that’s because these bloggers are (a) in government-controlled territory and (b) likely talking to Assad supporters or those too afraid to speak out.

Then there’s willful ignorance. Take the example of Drew Binsky. I’ve never met him, though I do enjoy his videos. And I’m sure he’s a well-intentioned guy. But he went to Syria and, when challenged about this for the same reasons I’m bringing up, said, and I quote:

I know that Syria has been in a constant state of war for nearly a decade and I choose not to make that a focus. Why? It’s a lose-lose for me, because A) it’s a touchy subject and B) I don’t know much about the war and politics in general. In fact, I can’t even tell you a thing about American politics cuz I don’t really care! I’ve spent the last 8 years on the road and I’ve purposely separated myself from any politics because I choose to spend my time doing other things that make me happy. I guess the bottom line here is that more eyeballs on my videos means more haters, and we all know that haters are gonna hate!

Apparently, people who bring up the notion that maybe going to a war zone is not a good idea are haters. And here he admits to not knowing much about the war or caring too much about the subject.

How can you visit a country torn by war and not want to learn more about it?

How can you have a platform and seek to educate people and not talk about the conflict? It’s a pretty important thing!

And he’s not the only one who has done this, just the most well known. There have been many others. (It would be hard to link to them all, but they are easy to find via a Google or Instagram search.)

I think trips like these to war zones or repressive regimes are further examples of the lack of ethics in the online travel industry, as well as “look at me” vs. “learn from me” writing that puts the reader second to the influencer’s own ego. Rather than using this visit as a teachable moment to expand people’s knowledge, educate, and talk about a dire situation, they visit without thinking about that deeper impact.

But against the backdrop of war, egos must wait.

A visit to government-controlled territory during an ongoing conflict is simply playing into the propaganda that says that the news is exaggerating the plight of the people. What gassing by the Assad regime? What war crimes? What factionalism? There’s nothing to see here, right?

Many of the Syrians I spoke to had even fewer kind words for those who go there. They talked of those who visit now as “taking joy in others’ misery,” whitewashing Assad’s crimes, and Western privilege. This quote from Zaina Erhaim, an exiled Syrian journalist, sums up what I heard from Syrians I spoke with:

Besides the active war going on and tens of civilians being killed on a daily basis, beside whitewashing Assad as [someone] who has brought life and security back, using their privileged background [to get] released if stopped at checkpoints, above all that, to cross to our home where half of us are forbidden from going to, as we are forced into displacement and in exile, to walk above our memories and wounds in order to get some extra views, is inhuman.

Their blogs step on our trauma as they take smiling pictures in our streets, with our destroyed homes and favorite restaurants in the background, while we are prevented from going back to because we simply did our work and protested for basic rights.

I think travel boycotts are dumb. People are their governments. But when war is happening and millions are dying and displaced, our desire to travel must wait. When Syria and these other countries are done fighting and need to be rebuilt, tourism dollars are a wonderful way to help make that happen.

Take Afghanistan or Iraq. While turmoil still exists there, these countries are trying to pick up the pieces and rebuild. There are new governments, and the society is trying to move past the conflict. There’s a functioning economy and civil society. Now is the time to visit those places.

But Syria? There is still an active conflict with other nations rolling tanks through part of the country. (Turkey and Russia are in conflict there, and Israel recently sent missiles into Damascus). Wait until the conflict is over, people aren’t dying and starving in the streets, and there is (hopefully) some sort of brokered truce or long-lasting cease-fire.

That’s when people will need our tourism dollars.

If you want to help those in Syria, lobby governments to try to find a way to end the conflict. Give to aid organizations like these:

But don’t go visit. Don’t give Assad his propaganda wins. Don’t make people think everything is fine and the world should move on. Don’t go to a place where so much suffering is going on just because you want to see it. It’s just the wrong thing to do.

Travel enriches the mind and expands the soul.

But it loses its charm when a place that is still shattered like glass and those around you are mired in a conflict without end.

Book Your Accommodation
You can book your hostel with Hostelworld as they have the largest inventory. If you want to stay somewhere other than a hostel, use Booking.com, as they consistently return the cheapest rates for guesthouses and hotels. I use them all the time.

The post You Should NOT Visit Syria Right Now appeared first on Nomadic Matt’s Travel Site.

The Best Neighborhoods in Los Angeles: Where to Stay During Your Visit

Philanthropy & Travel: How One Business Is Giving Back w/FLYTE