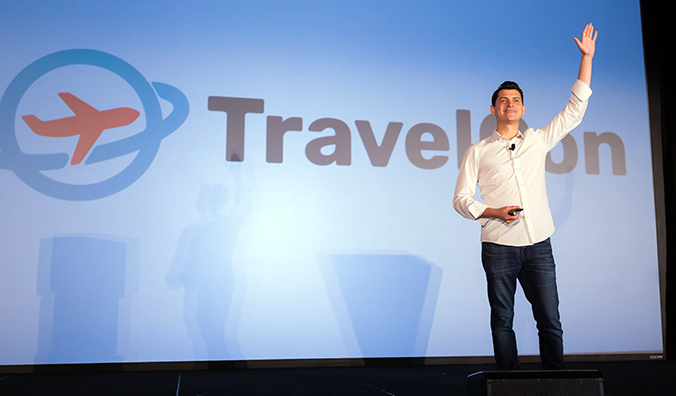 TravelCon is now only TWO months away!

This is going to the biggest travel media event of the year and the only one that focuses on all sides of the industry: traditional writing, blogging, YouTube, Instagram, and photography.

If you’ve been thinking of getting into the travel industry, don’t wait much longer as we expect to sell out again. We only have 130 tickets left and, when we sell out, that’s it.

So how will TravelCon help you?

Think of the millions of blogs, Instagram accounts, vlogs, and freelance writers out there.

How do you stand out among them all?

How do you become more than just another email in someone’s inbox?

By becoming a face.

What gets lost in this age of online hyper-connectedness is that old-fashioned face-to-face networking wins. When people know you personally, they are more willing to work with you. When they’ve talked to you and shared a beer with you, they WILL open your email.

Because you are no longer just another random stranger on the Internet.

Someone they want to work with.

For example, last year, one of our attendees struck up a conversation with a rep from Czech Tourism — and ended up producing an ad campaign for them:

That’s the power of in-person events.

It allows you to talk in a way online pitching and communication can’t.

You’re only as successful as your network — and that network is strongest when it’s based on real-life connections.

And, if you’re worried you’re too much of a beginner, an attendee came last year who knew she wanted to do something in the travel industry — but she wasn’t sure what. Well, now she is running a successful tour company based on what she learned!

All within less than a year. 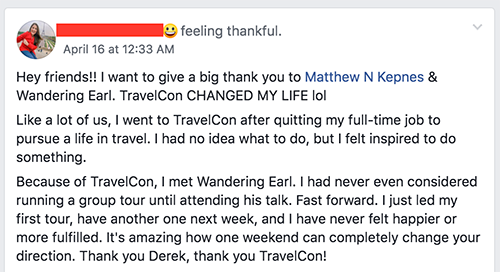 This event is going to be bigger and better than last year’s, and with only two months left to go, there’s not much time to get your ticket and make your plans. Over the last few weeks, TravelCon preparation has kicked into high gear:

1. We released our initial schedule. (There’s still a few more talks and speakers on their way.)

2. We signed our Friday night band! (I’m going to keep it a secret, but they were featured in an Apple ad!)

3. And, finally, we signed on more sponsors (with more on the way), including:

Adthrive
AdThrive is the leading ad monetization platform for high-quality, mid-sized digital publishers, empowering content creators to make a living doing what they love while the company manages the advertising for them.

Bucketlist.Club
BucketList.Club is a startup aiming to help its members accomplish more of their bucket list goals by introducing them to influencers and businesses with relevant experiences and offerings. We developed a business model and features that help Influencers promote their content and identify commercial opportunities, all while they inspire others with their content.

ConvertKit
ConvertKit are creators who help creators earn a living online. They have the best email marketing software on the web. Their features are built by bloggers for bloggers to help online businesses grow their biggest asset: their email list.

Exercore LLC
Our flagship product called the Eustachi is a first to market product designed to help anyone suffering from clogged ears by exercising their Eustachian tubes. The Eustachi helps by INSTANTLY clearing stuffy ears, anytime & anywhere using just a little air. The Eustachi is a must have for the traveler who suffers from ear problems.

Fat Tire Tours
Fat Tire Tours was established in 1999 with the goal of being a bridge between the English-speaking traveler and some of the best cities in Europe. Today, with locations in 12 cities across Europe and the US, the company’s mission is to provide safe, fun, and unforgettable experiences through superior customer service that creates memories and smiles that last a lifetime.

Memphis Tourism
Where in world can you visit the home of the king of rock n’ roll, bike across the Mississippi River and pay your respects at the site of Civil Rights history — only in Memphis. But the home of Blues, Soul and Rock ‘n’ Roll is so much more. Memphis’s unexpected combinations create one-of-a-kind experiences.

Moon Travel Guides
Founded in 1973, Moon was one of the first advocates of independent travel. Our authors are experts who have a passion for their destinations—they are women and men who are politically and culturally minded, informative, adventurous, inspiring, and have great stories to tell. They experience activities and destinations the same way our readers do — firsthand — making it possible for Moon to deliver up-to-date, reliable, and entertaining information.

Providence
Historic and hip, charming and chic, Providence, Rhode Island combines the best of a quaint New England town with the amenities and sophistication of a larger city. The city’s downtown is compact and filled with innovative and eclectic restaurants, a vibrant arts and culture scene, and well-preserved architecture.

Here’s a full list of our current sponsors that will be at the event (with more to come):

We know that going to conferences can be scary. Will you meet people? Will you make friends? Will you learn enough to justify the cost?

That’s why we hold tons of networking events, host in-depth sessions with experts from the travel sphere (and other fields), and have some amazing brands and companies for you to meet and do business with.

The best connections I’ve made — and improvements to my blog — have always been the result of going to in-person events.

So come attend TravelCon in June.

Take your career to the next level — and make friends and connections that will last a lifetime.

And, if you have any questions, leave them in the comments!

P.S. – If you’re looking to sponsor the event, let’s chat!

The post TravelCon Update: Why You Should Be in the Room Where it Happens appeared first on Nomadic Matt's Travel Site.