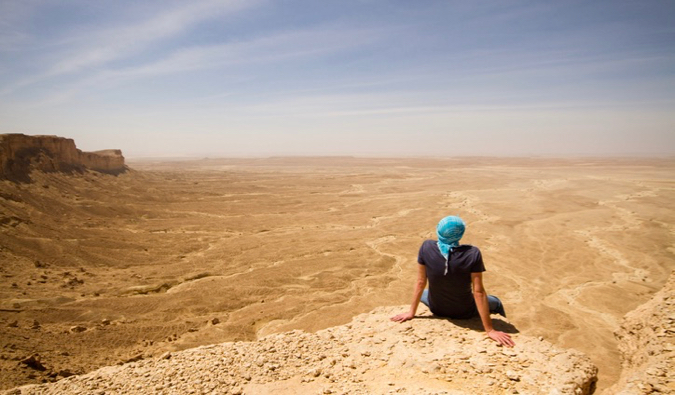 As I scrolled through my social feeds recently, I noticed, set against desert backgrounds, a number travel “influencers” extolling the beauty and virtue of Saudi Arabia.1

But the majority weren’t there to take advantage of the new tourist visa and explore on their own. No, they weren’t there to see what this new openly country was really about. They were there on paid press trips, funded by a company called Gateway KSA, an NGO designed to promote the country. (Note: The organization says it’s independent of the government, but it has Saudi royal family members on its board and, given the complete control the family has over the country, I doubt they bring in influential Westerners without Royal approval.)

Now, let me be clear: I don’t think there’s anything wrong with visiting Saudi Arabia. I have a few friends who just did. If you want to travel somewhere, you should. People are not their governments and I’m not one for travel boycotts.

But taking money from a government is a lot different than paying your own way. As Rick Steves has said, travel is a political act, and taking government money can create the impression of tacit approval of it. So when a government offers to sponsor a trip, I think the question that needs to be asked is “Is this a government I want to appear to support?”

The government of Saudi Arabia oppresses its people and promotes extremism abroad. It jails activists (including bloggers), has a horrible record on women’s and LGBT rights, kills journalists (Khashoggi is just the most famous example), and suppresses dissent, tortures detainees, uses flogging and amputation as punishments, and is among the world’s leading executioners.

Those involved in these paid trips say they were simply showing off the destination and the people. “It’s not about the government,” they said. “Saudi Arabia is a beautiful place, and there are lots of interesting things to see there.”

No doubt there is beauty in that country and no doubt there are incredibly warm and wonderful people there too.

Yet I believe that taking money from government-funded organizations creates a moral hazard when you consider that the government jails its own bloggers and “disappears” LGBTQ and women’s rights advocates.

Psychology has shown time and time again everyone tries to reduce dissonance to justify their actions.2 In this case, I think those taking these trips were either just clueless about issues with the countries or created rationalizations when a giant check was waved in front of them. Both reasons are disheartening and are morally shallow.

That’s not saying that I always bring up politics or societal conditions in my posts. Or that it’s necessarily the job of a travel writer to always discuss local politics.

After all, no government is perfect. They all have their faults. You can find terrible things committed by governments around the world.

But I think some destinations require more detailed and deeper coverage. How can one go to the Amazon without commenting on policies that lead to its destruction? How can one go on safari without talking about wildlife issues? There are aspects of travel that require more insightful reporting.

Places like Saudi Arabia, Syria, Nicaragua, Chile, and North Korea, for example, are among many places that require more rounded reporting given their political situations (and the fact that one is in the middle of a civil war).

Not bringing up the elephant in the room (the government’s actions) also does readers a disservice, because it may put them at risk when they visit since they might believe they can travel like the influencer did or how they do in the West.

Press trips are not like regular trips. They come with handlers, special access, drivers, guides, and a host of other benefits a regular traveler will never get.

Now, there’s nothing wrong with that. It’s one way industry insiders find out what’s new.

But washing one’s hands of the political realities of sponsored travel is the problem, especially with influencers and bloggers who lack the editorial firewall traditional publications have. It’s why, when I asked on a recent survey if people trust bloggers who take a lot of paid trips, 85% said no. In another recent study, only 4% said they trust online influencers.

So prevalent are the hashtags #ad and #sponsored that people tune them out.

Sure, there have always been paid trips, but I feel there’s less of a sense of ethics among modern travel influencers. Looking back on the early days of blogging, I feel there were lines we wouldn’t cross — mostly because we were travelers too, and we had an idea about the context of the trips we were on. But now there’s more money floating around as millions of dollars per year are thrown at influencers. I’ve been offered huge sums to promote products (I once got offered $15,000 for a single blog post). It’s hard to turn that down if you don’t have another source of income.

Moreover, social media didn’t exist when most bloggers started and we had to rely solely on our blogs and in-person relationships. Now, with so many platforms, so many people competing for gigs, so much money out there, and the feedback loop social media provides, I think people are justifying morally dubious activities in a way that didn’t happen in the past.

Yes, traditional writers bemoaned us the same way I’m bemoaning “influencers” now, but I don’t remember standing en masse on people’s rooftops in Greece, going off trail to take pictures of flowers, or hanging off ledges for the perfect shot the way I see people doing those things now. Too much of today’s content is “look at me,” not “learn from me.”

So what can be done?

My advice for people who consume travel content is to avoid people who do things that aren’t legal or ethical and don’t paint a full picture of what’s happening in a country. By glossing over thorny issues, they make it more likely you’ll think everything is fine and increase the risk of something going wrong.

Look for those who are sharing more than pretty photos. Look for those doing things you, the consumer, can also do (not just on a paid promotional trip), because those are the ones who are going to be able to help you learn how to travel better in real life.

And, my fellow creatives, I urge you to consider the ethics of who sponsors your trip and to give your readers the most complete and accurate information. Don’t just feature glossy pictures. We get it: every place has wonderful people, every place has beauty.

But some places require more in-depth context. Some paid trips shouldn’t be taken.

Because, while special access and paid trips are fun, they aren’t that fun when the money received from them drips in the blood of the very citizens you are trying to highlight.

Footnotes
1. I’m not here to call anyone specifically out but there’s an article that goes down that highlights some people.

2. The best book on this subject is Mistakes Were Made (but Not by Me): Why We Justify Foolish Beliefs, Bad Decisions, and Hurtful Acts.

Should Travel Be Inexpensive?

9 Ways to Explore the Caribbean Sustainably