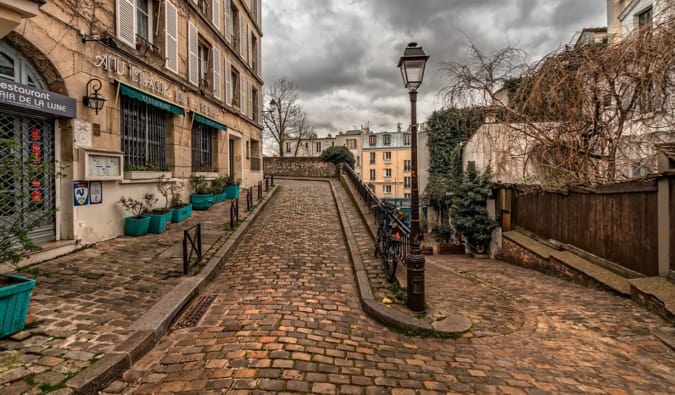 Paris is filled with famous attractions: the Eiffel Tower, the Louvre, Versailles, the catacombs, the Pantheon, the Arc de Triomphe, Sacre-Coeur. The list goes on. There are so many amazing sites here that you could spend days (heck, even weeks) just seeing the main, most well-known ones.

But there’s more to Paris than the sites that attract thousands upon thousands of visitors each day.

While I was living Paris the past few months, I made it my mission to see some of the more unusual, lesser-known (but equally awesome) attractions (that didn’t come with the aggravating crowds that make so many of Paris’ attractions unbearable).

And, while some of the things on the list below might not be “super secret” attractions or activities, they do fall into the category of “overlooked attractions” so I included them.

Here are some of the best off-the-beaten-path things to see and do in Paris:

This is where macabre museum meets haunted house. Numerous rooms highlight some of the more unsettling aspects of Paris’s long and often dark past, such as the Phantom of the Opera, vampires, or the crocodiles in the sewers. Using real actors as well as animatronics, the city’s gruesome and unsettling history is brought to life in an interesting way. In addition to their museum, they also have escape rooms as well as different levels of intensity depending on how scared you get!

Édith Piaf is perhaps the most famous French singer from the 1930s to the 1960s, and know around the world for her songs La vie en rose and Non, je ne regrette rien (which appeared in the movie Inception). She lived in a little apartment in the Ménilmontant district at the start of her career, which has been turned into a tiny museum dedicated to her. You get a glimpse at her life through her gold and platinum records, photographs, clothing, letters from fans, posters, recordings, and sheet music.

Marie Curie was the first woman to win the Nobel Prize (and the only woman to win it twice) for her research into radioactivity (a word that she invented). She was the first female professor at the University of Paris as well as the first woman to be entombed in the Panthéon on her own merits. Located in the 5th arrondissement, this museum, in her old laboratory, highlights her radiological research. It’s insightful and eye-opening for anyone unfamiliar with her historic discoveries. 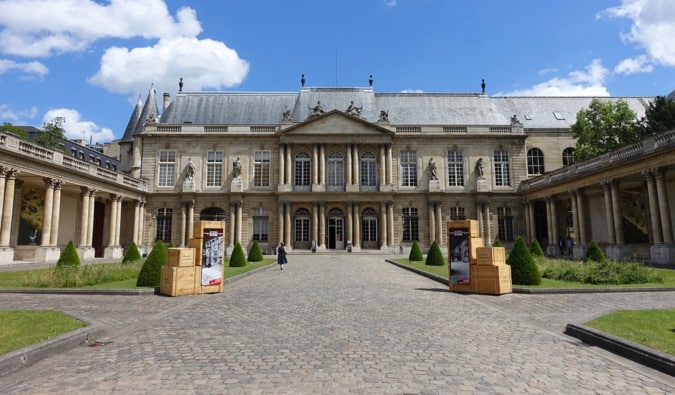 Opened in 1867, the National Archives houses thousands of historical documents dating back to 625 CE. One of six national archives in the country, the museum sheds light on France’s turbulent past, providing nuanced historical details and context through permanent and temporary exhibitions.

Built by the order of Napoleon I, the building itself (known as the Hôtel de Soubise) is absolutely stunning. It is in the late Baroque style, embracing long columns and lots of statues and sculptures. It features immaculate grounds and gardens as well. They always hold a lot of good exhibitions too.

5. The Gallery of Paleontology and Comparative Anatomy 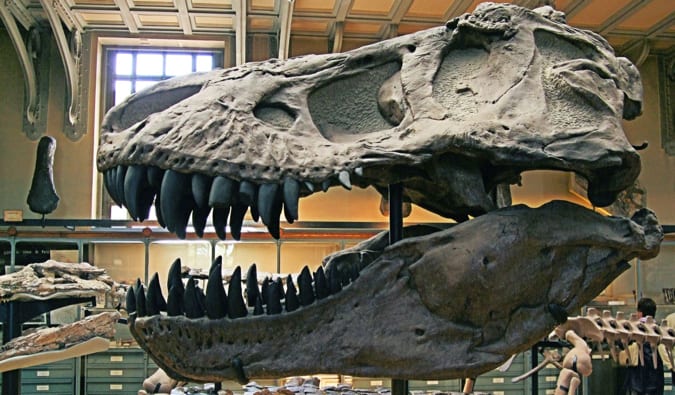 Opened in 1898, this museum is home to over 1,000 animal skeletons from around the world, including complete skeletons of elephants, large cats, and even dinosaurs. It’s as interesting as it is unsettling: all the animals are facing the same way, making it look like you’re in the midst of some undead stampede!

Paris has a long history with the esoteric, one that is brought to life in this fascinating (if not macabre) museum founded by an eccentric scholar to showcase his knowledge of the undead and esoteric. Here you’ll find vampire-killing kits, rare texts on demonology, and mysterious ancient relics. It’s a busy, eclectic, creepy museum that’s a feast for the eyes and one worthy of a visit if you’re at all interested in more obscure (and fanciful) tales. It’s a fun, kitschy museum.

14 Rue Jules David, +33 1 43 62 80 76, artclips.free.fr/musee_des_vampires/MuseeVampires1.html. You’ll need to make an appointment in advance by phone. (Don’t worry if the voicemail greeting is in French — the curator speakers perfect English). 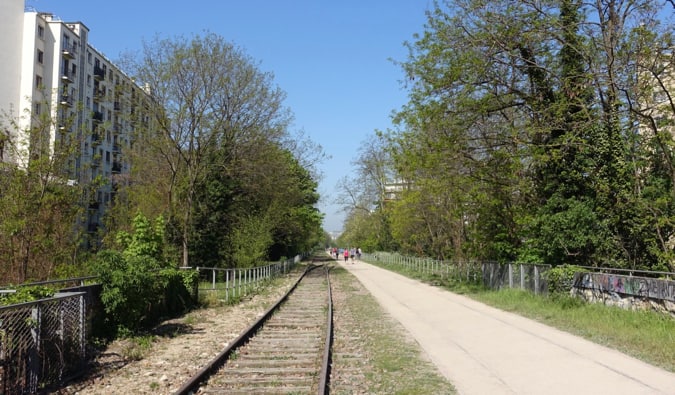 In use from 1862 through 1964, the railway circling Paris was abandoned when the city expanded beyond its limits. It’s mostly hidden behind buildings and covered in wild plants and grass now, though some sections are now officially open to the public. You’ll find all sorts of flowers and street art along the tracks.

While some sections are illegal to visit, near Parc Georges Brassens you’ll find a section of the tracks known as the ‘Passage de la Petite Ceinture’ that is both free and legal to visit. It’s located in the 15e arrondissement. 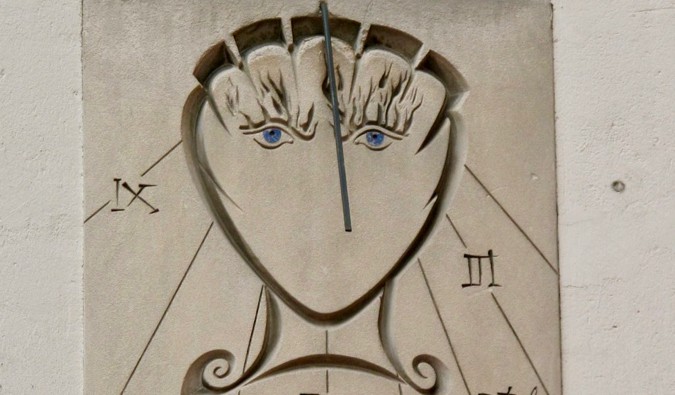 This surrealist sundial was created by world-renowned artist Salvador Dalí. Located on Rue Saint-Jacques, it’s is a mix of a human face and a scallop shell (the symbol of the Camino to Santiago, since the street is named after the saint). While the sundial doesn’t actually work, it’s nevertheless an easy way to see a piece of artwork by one of the most famous artists in the world. 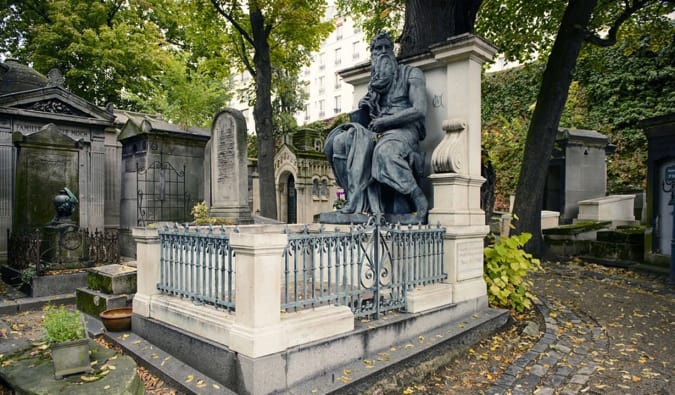 While the Père Lachaise Cemetery is the largest and most popular in Paris, for a more secluded stroll, check out the Montmartre Cemetery. Plenty of people visit the top of Montmartre for Sacré-Coeur and the view, but few take the time to wander this cemetery sitting at the foot of the district. It opened in 1825 and is home to many cobwebbed mausoleums, as well as a handful of stray cats. You won’t see many people here, so you can explore in peace.

10. The Museum of Counterfeiting

Opened in 1972, this museum is home to counterfeit items that have been collected by France’s customs agents and police (as well as donated items from brands and consumers alike). There are over 500 items in the museum, ranging from counterfeit art and luxury goods to more mundane items, like cleaning supplies. While some knockoffs are impressive in their duplicity, it’s also funny to see just how bad some counterfeiters were! 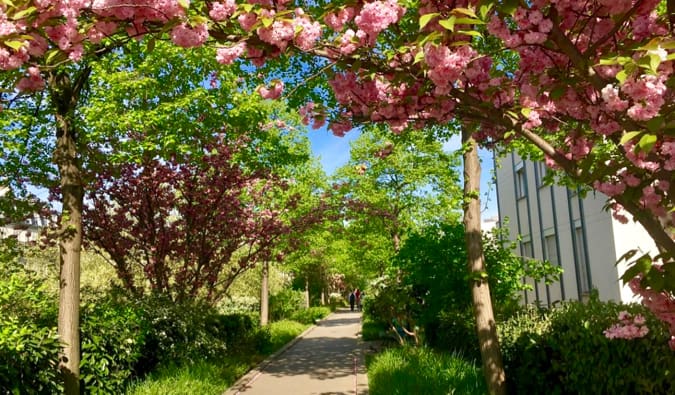 This tree-lined walkway is a greenbelt that extends almost 5km along the old Vincennes railway line. The railway line ceased functioning in 1969, with the park being inaugurated a few decades afterward. Until New York built their High Line, it was the only elevated park in the entire world. (And, honestly, this is way nicer then the NYC High Line).

You’ll find lots of trees, flowers, ponds, and places to sit along this long path that stretches from Bastille to the edge of Paris. It’s a long, easy, and beautiful walk. You won’t find many people here. Even on a nice day, it’s rather empty. It quickly became one of my favorite things to do in Paris and I can’t recommend coming here enough!

Stretching 4.5km, the Canal Saint-Martin is a man-made waterway commissioned by Napoleon. Construction finished in 1825, connecting the Canal de l’Ourcq to the Seine via both above ground locks and underground tunnels. While not any secret spot (on a nice day, you’ll find the canal lined with people), it’s mostly a spot for locals who want to have a picnic and relax. So, say no to the Seine, and come have your outdoor picnic along the canal. It’s more relaxing and there will be fewer people! 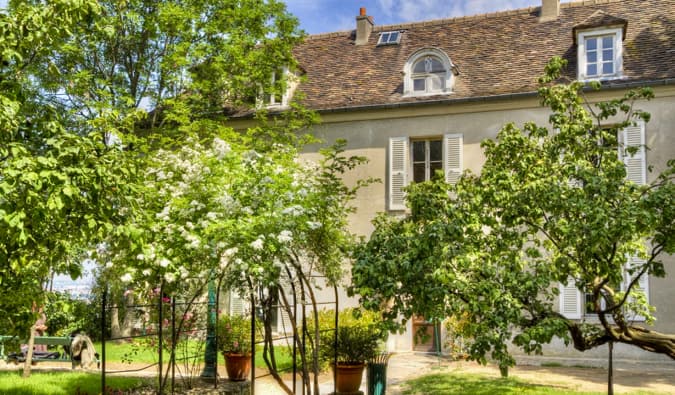 Founded in 1960, this museum is located throughout two building that dates back to the 17th century. Over the years, the buildings were home to many famous writers and painters. The gardens of the museum were actually renovated to look more like the gardens in Renoir’s paintings (there is also a vineyard nearby that dates back to the Middle Ages but it makes horrible wine). The museum’s permanent collection includes a wide variety of paintings, posters, and drawings.

12 Rue Cortot, +33 1 49 25 89 39, museedemontmartre.fr/en/le-musee. Open daily from 10am-6pm (7pm in the summer). Admission is 12 EUR for adults, which includes an audio guide. Discounts are available for students, children, and persons with disabilities.

While the main sights in Paris are always worth checking out, if you want to be more than a tourist and develop a greater appreciation for the City of Light’s unique and complex history, visit these unconventional and unusual attractions in Paris.

Book Your Trip to Paris: Logistical Tips and Tricks

Book Your Accommodation
You can book your hostel with Hostelworld. If you want to stay somewhere other than a hostel, use Booking.com as they consistently return the cheapest rates for guesthouses and cheap hotels. I use them all the time. Some of my favorite places to stay in Paris are:

Looking for more information on visiting Paris?
Check out my in-depth destination guide to Paris with more tips on what to see, do, costs, ways to save, and much, much more!

The post 13 Off-the-Beaten-Path Things to See and Do in Paris appeared first on Nomadic Matt's Travel Site.