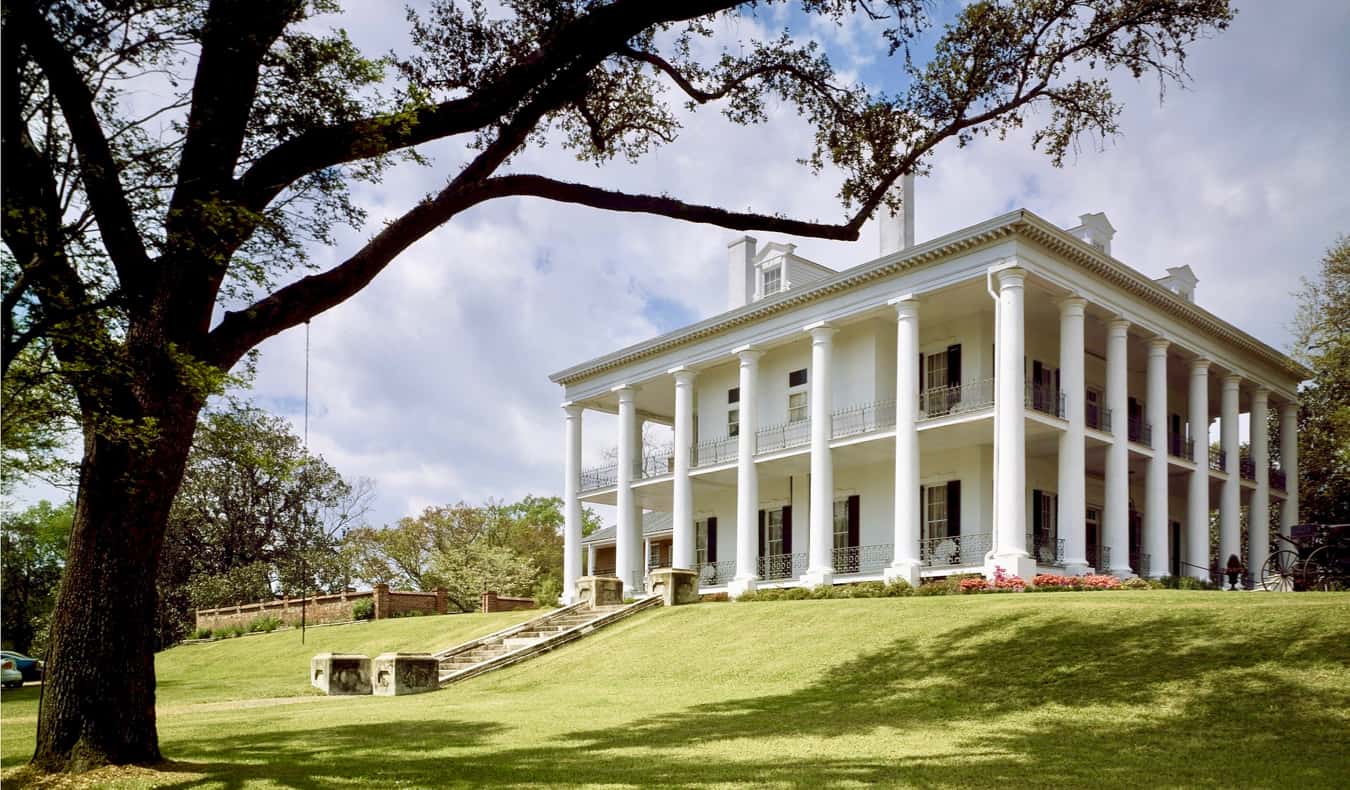 As the Southern cotton economy expanded on the back of slave labor in the early 1800s, towns emerged to transport the cotton on the Mississippi River. New Orleans, Memphis, Vicksburg, and Natchez are the four most famous of these towns.

Located high on the bluffs of the Mississippi River, Natchez, Mississippi, was established by French colonists in 1716. The defensible strategic location ensured that it would become a pivotal center for trade.

In the middle of the 19th century, the city attracted Southern planters, who built mansions to show off their vast wealth from the cotton and sugarcane trade. Natchez was where planters came to escape the heat and isolation of the plantations. It was the Hamptons of the South — the place where the rich relaxed and socialized.

I never heard of Natchez until a few weeks before I visited. While in Nashville, I met some local guys at a bar. Fascinated by my road trip plans, they gave me all the information they could on their home state of Mississippi. I mentioned my desire to see antebellum homes.

“That’s Natchez. If you want antebellum homes, Natchez is the place to be,” they agreed.

So I drove to Natchez, with its dozens of pre-Civil War antebellum homes. As a former history teacher who specialized in pre–Civil War America, I have a significant interest in this part of the country. I’m fascinated by the hypocrisy and duality of pre–Civil War Southern society.

On the one hand, it was genteel, polite, and formal. On the other, it was brutally racist. Southern egalitarian views of chivalry, equality, and honor extended only to a small segment of society and they found no hypocrisy in owning slaves, whom they brutalized to no end.

(Note: Reams of essays and books have delved into Southern culture. If you’re looking to learn more, check out Ken Burns’s The Civil War and The Fall of the House of Dixie: The Civil War and the Social Revolution That Transformed the South.)

Today, Natchez remains a beautiful city and many of the historic homes are still here. Secession sentiment never ran high here and the city quickly surrendered to the Union Army in 1862. Therefore, none of the destruction that took place in other cities occurred here.

Today, Natchez trades in tourism instead of cotton. Visitors to the historic homes, surrounding Natchez Traces, and gambling on the riverboats sustain this tiny town. 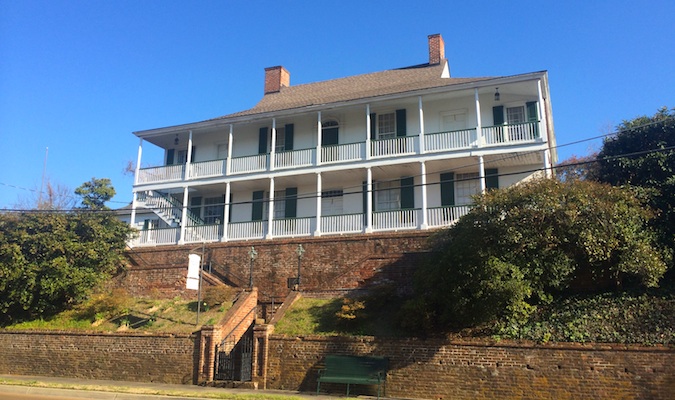 But the old homes are the biggest draw.

By today’s standards, they are average suburban homes. You wouldn’t stop and think “Wow, that is a mansion!” But for the period, these homes were an ornate testament to the planters’ great wealth, with high ceilings, intricate wallpaper designs, and multiple stories. They were filled with fine china, exotic carpets, and expensive furniture.

There are over 20 homes here. I didn’t get to see them all, as many are private residencies. But I saw a lot – and the following are my favorite historic homes to visit in Natchez: 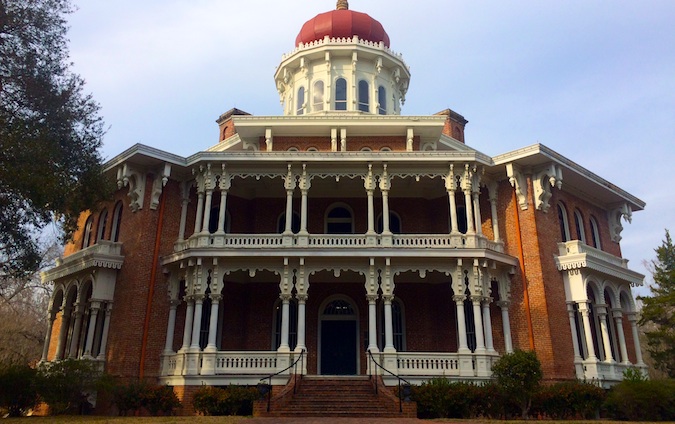 This was one of the most interesting of all the homes. It had stunning grounds and an incredible design featuring a huge onion-shaped dome. It’s the largest octagonal house in the United States and entirely unique.

Construction began in 1859, however, the owner died before most of the house was completed, leaving the entire upper floor unfinished (to this day, only a handful of the rooms are finished)

Today, it’s one of Natchez’s most popular homes and you’re free to tour the home and read about its history. Be sure to wander the grounds, too. They’re beautiful! Admission is $25 USD. 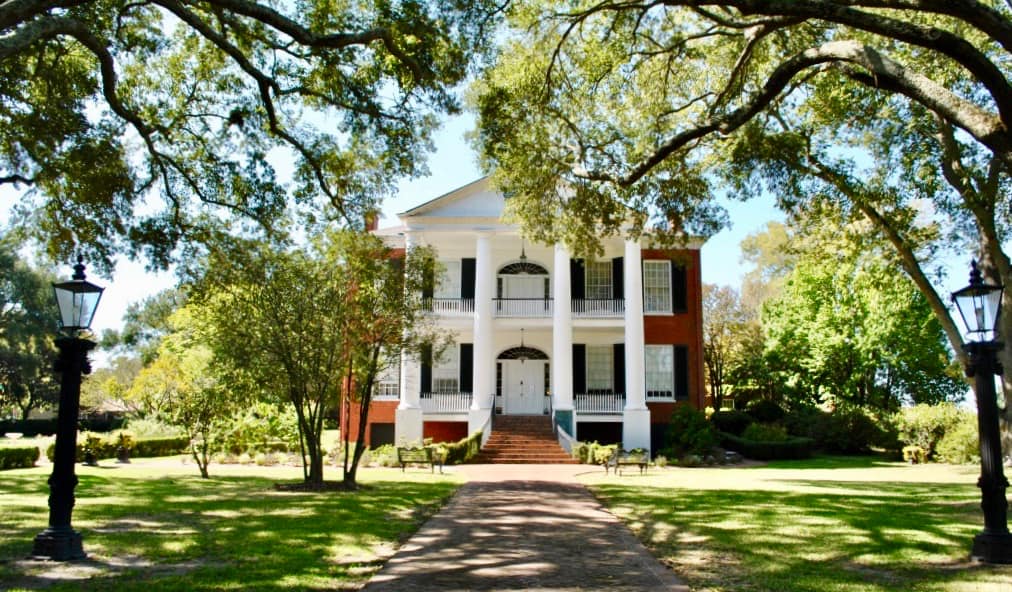 I found this mansion to have the most beautiful interior of the handful of antebellum homes I visited. Built in 1823, its design was so popular that it inspired many other homeowners in the region to mimic its Greek Revival style.

The mansion was built for a wealthy cotton broker. In 1863, after the Battle of Vicksburg, General Grant commandeered the home to use as his headquarters. General Gresham, who commanded Union troops in the region after Grant, continued to use the mansion as his headquarters for the duration of the war. There are all kinds of historic artifacts and furniture inside from the 19th century too. 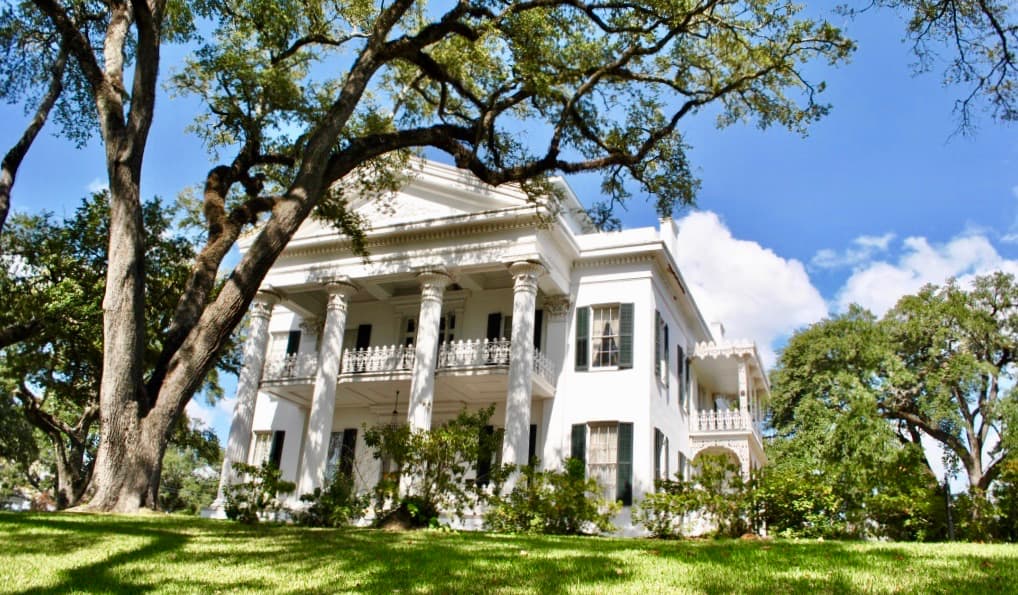 Stanton Hall and its grounds take up an entire city block. It had the prettiest grounds of all the homes I visited too. Built in the 1850s (for the paltry sum of $83,000 USD), the home is a replica of the original owner’s former home in Ireland. Knicknamed Belfast, the interior is incredibly elaborate, featuring Italian marble and glass chandeliers.

In 1890, the estate became home to Stanton College for Young Ladies. In 1940, it began its transition to a historic home and museum and is one the U.S. National Register of Historic Places as well as the U.S. National Historic Landmark list and the list of Mississippi Landmarks. Admission is $25 USD. 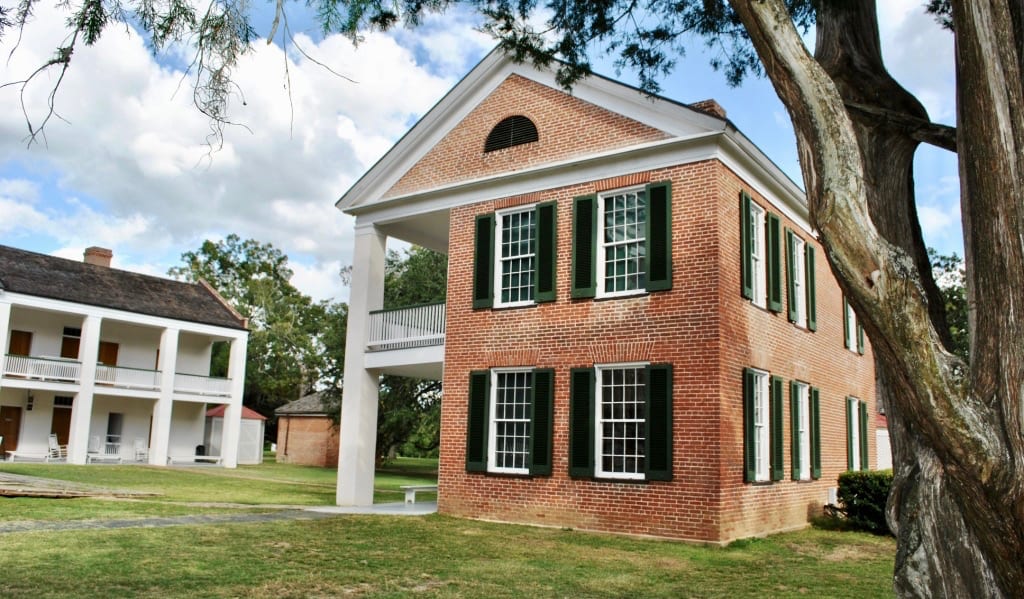 Built in the 1840s, this 15,000-square-foot mansion represents the peak of Greek Revival design. Designed by a local lawyer and landowner, the original furniture of the home is still in use today, having been passed down through the centuries with each successive sale of the house. Most of the furniture dates to the pre-Civil War era.

In the 1970s, the mansion was used for elaborate parties and events before being turned into a museum and historic site. Like many of the antebellum homes here, it’s on both the U.S. National Register of Historic Places and the U.S. National Historic Landmark list. Admission is $10 USD.

Other Things to See and Do 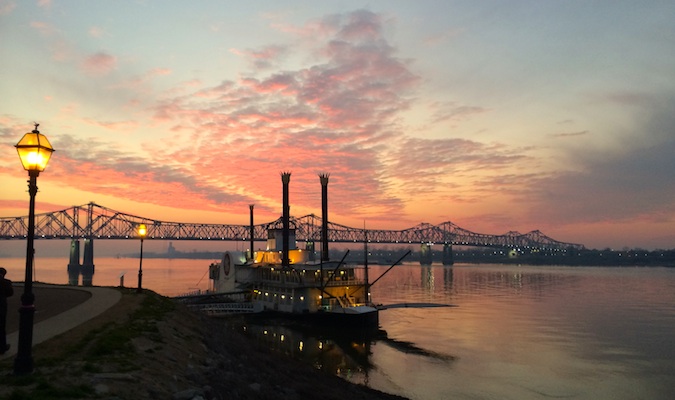 In addition to the antebellum homes, there are a few other things to see and do in Natchez:

The Natchez Pilgrimage
During the Natchez Pilgrimage in the spring, all of the private historical homes open up to the public. The costumed guides — some descendants of the original owners — explain the history of the home, their family, and the region. It’s the city’s biggest annual event and there are some 20 homes on display.

Ghost Tours
In a town with so much tumultuous history — including wars and oppressive slavery — it’s no wonder that there are all kinds of eerie and unsettling tales to be found in Natchez. If you’re a fan of the paranormal (or just want to do something unique), try taking a ghost tour. Downtown Karla Brown offers ghost tours a few evenings each week for $25 USD. You’ll hear all about Natchez’s haunting and spooky tales and get to see a side of the city most tourists miss.

Magnolia Bluffs Casino
This casino is located on the Mississippi River in the town’s old mill. The mill opened in 1828 and operated until 1962, eventually being bought and turned into a casino. It’s small and a bit outdated, but they have plenty of slot machines and a few table games, and the views over the river are picturesque.

St. Mary’s Basilica
This church was built in 1842 and took over forty years to complete. While the exterior is a little plain, the elaborate interior is beautiful, with colorful stained glass, statues, and a spacious vaulted ceiling. The original organ from 1882 is still in use as well. It’s on the National Register of Historic Places.

The Emerald Mound
This sacred hill just looks like a flat, grassy pentagon. However, it was once a well-appointed holy site. Constructed sometime between the 13th and 17th centuries, it was an elevated place of worship for the Plaquemine Native Americans. Ceremonial stone structures used to sit on top of the mound, which is 65 feet tall, though it is empty today. All kinds of animal bones have been found nearby, leading researchers to believe it was the site of religious or sacred activity.

Visit the King’s Tavern
Visit the King’s Tavern, which was built in 1769 and is the oldest bar in the city (and, according to legend, the most haunted). After the Revolutionary War, it was used as an inn and tavern, as well as where the town’s mail was delivered. Until the development of the steamboat, the tavern relied on both coach drivers and outlaws who stopped by in between trips. When the invention of the steamboat made travel in the region safer, business dwindled and it was eventually sold. Today, it’s a farm-to-table restaurant.

For a map of the area and suggested sites to include on your self-guided tour, check out this free tour from Visit Natchez.

Natchez is beautiful and elegant. I loved strolling around the streets, marveling at the beautiful homes, stopping at King’s Tavern for wine while avoiding ghosts, and sitting in the park as the sunset over the Mississippi. It was the highlight of my trip to the state.

But, while accommodation is expensive, food and drinks are relatively cheap so you can balance it all out.

Natchez may not be a budget travel destination, but if you are looking to learn about American history, see beautiful homes, and visit a destination off the beaten path for most travelers (visitors here tend to be from the surrounding region), visit Natchez. You won’t be disappointed.

Book Your Trip to Natchez: Logistical Tips and Tricks

Book Your Accommodation
You can book your hostel with Hostelworld. If you want to stay somewhere other than a hostel, use Booking.com as they consistently return the cheapest rates for guesthouses and cheap hotels.

Want more information on the United States?
Be sure to visit our robust destination guide on the USA for even more planning tips!

The post 10 Things to See and Do in Natchez, Mississippi appeared first on Nomadic Matt's Travel Site.

Coronavirus and Travel: What You Need to Know (Plus Resources)

How to Start House Sitting

TNN: What It’s Like Traveling During COVID (& What You Need to Know)